Global Perspectives: Pupil Attitudes to Self and School Report 2018

More than one in 10 children at international schools in the Middle East and across South East Asia have attitudinal roadblocks to learning, says a new study.

According to the report authors, who looked at data from over 95,000 children aged 7-16 in both regions, a significant minority of students struggle with low levels of self-belief, a poor perception of their own capabilities and little confidence in their own learning.

Based on one of the largest ever datasets of international student attitudes, the analysis suggests almost one in six children (15%) registered low or low moderate satisfaction in their general work ethic.

Thirteen per cent (13%) of students have concerning levels when it comes to their self-regard as a learner and 16% have a negative response to curriculum demands.

The study, by GL Education, also suggests that students in the Middle East and South East Asia tend to have slightly more negative attitudes towards school life than students in the UK where it conducted a similar analysis*.

For instance, when looking at views around preparedness for learning, the average raw score of UK students in Years 3 to 9 is 90% and in the Middle East and South East Asia it is 86%.

Similarly, the raw scores for general work ethic and response to curriculum demands are 85% and 80% in the UK compared to 76% and 69% in Middle East and South East Asia schools.

Dr David Gleason, an American clinical psychologist and author of At What Cost? Defending Adolescent Development in Fiercely Competitive Schools, worries that “too many students feel stressed and pressured, conditions that lead not only to their anxiety and depression, but also, to a host of dangerous manifestations of those conditions, such as substance abuse, eating disorders, sleep deprivation, cutting and other forms of self-injury.”

Another expert who contributed to GL Education’s report, Global Perspectives: Pupil Attitudes to Self and School, believes that EAL (English as an Additional Language) is a major factor for struggling students and that teachers also need to be mindful of students learning in a language other than their own.

Matthew Savage, the Principal of the International Community School, Amman, says that every child needs to be looked at “beneath their masks”. He argues that teachers are “duty bound to mine a deeper understanding of what lies beneath the masks each child has chosen to wear” when walking through the school gates.

James Neill, GL Education’s International Director, believes that there has been a sea change in understanding about what makes a good school and that the world has woken up to the fact that student wellbeing is now a huge part of the picture.

“Sometimes it’s very obvious when a student has issues in the classroom but there are a number of issues that are hidden and not obvious at all,” he says. “Using assessments and analysing the data can act as an early warning system to how a student is really feeling. It can help teachers become mental health first aiders and spot the children who need to be found.”

Global Perspectives: Pupil Attitudes to Self and School by GL Education is available as a free download from 00:01 GST and 04:01 SGT on Wednesday 28 February:
gl-education.com/globalperspectives

The study by GL Education was based on PASS data from 95,031 students from Years 3 to 11 in schools in the Middle East and South East Asia between September 2015 and July 2017.

*UK analysis and data referenced for comparison can be found here.

GL Education has worked in partnership with schools for over 35 years to develop a suite of assessments that support better outcomes for students. Its tests provide teachers with a comprehensive understanding of a student’s ability, attainment and attitudes, as well as any barriers to learning they may have. They are built on the best academic research and have been extensively trialled to help teachers make quick and effective interventions.

The Pupil Attitudes to Self and School® (PASS) survey often provides the ‘missing link’ when a student’s attainment scores do not match up with their ability data. It allows students to express their feelings and can help identify issues even before they manifest themselves, giving teachers the opportunity for early intervention. PASS is available in over 30 languages, does not involve curriculum-based material and does not need to take into account previous achievements or first language, making it ideal for use with children with EAL. 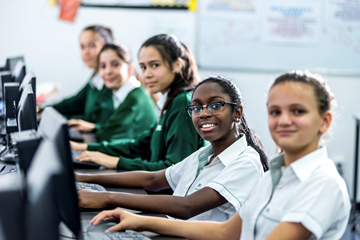 For more information or to arrange an interview with one of the report authors, contact: